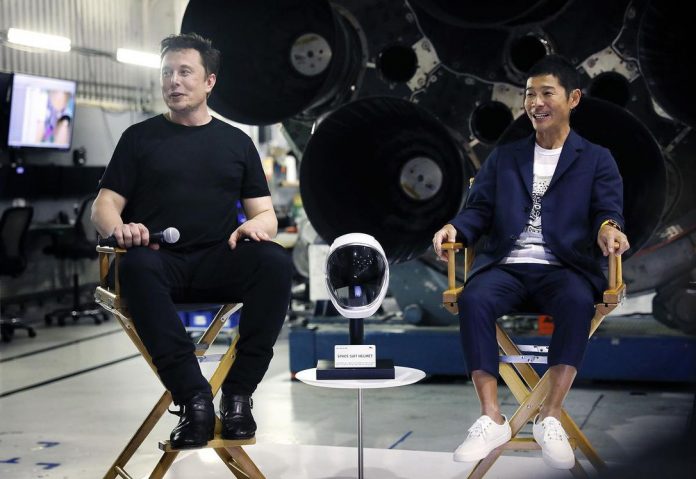 SpaceX co-founder Elon Musk may accompany the Japanese billionaire Yusaku Maezawa, the first passenger SpaceX considers to fly around the moon. Maezawa has invited Musk along on his flight to the moon.

“Maybe we’ll both be on it,” Elon Musk said after Maezawa’s invitation.

Musk recently announced that Yusaku will be the first one to travel to moon as part of the SpaceX Moon Loop programme.

The much hyped mission is expected to take off in 2023, and it would be the first lunar journey by humans since 1972. The announcement about world’s first moon tourist was made  SpaceX’s headquarters in Hawthorne, California, on Tuesday.

Yusaku Maezawa, 42, is the founder of Japan’s largest online fashion retail store, Zozotown. He has a net worth of $2.7 billion and is also an acclaimed art collector.

SpaceX is still working on the highly advanced tenchnologies that enable seamless space travelling. In a landmark achievement in 2016, the company unveiled a launch system -Big Falcon Rocket (BFR)- which helps this lunar mission.

“BFR is an important step toward enabling access for everyday people who dream of travelling to space”, SpaceX said in a statement.

Only 24 humans have so far visited the Moon, out of which 12 landed on the moon.  All of them were from America.